More than a year ago, Julie, my daughter’s Regional Center of the East Bay (RCEB) case manager, suggested that I enroll Katie in a special needs summer camp at Camp Krem near a Boulder Creek. Unlike Katie’s beloved Exceptional Needs Network (ENN) summer camp at Camp Arroyo, Camp Krem had longer programs than ran five or ten days. “You’ll need to work up to it,” Julie said, “but I think ten days without you to anticipate her needs will be an important milestone for Katie. Boost her independence and improve social skills in a setting she enjoys.”

I nodded. It seemed pretty tame, as far as goals go.

So in the spring, I contacted Camp Krem. I filled out voluminous paperwork and for:s, only to learn all the slots with a 1:1 aide were booked. Didn’t want to consider 2:1?

I asked Katie’s “team” of trusted advisors, and everyone agreed tha not having her own aide was risky in a new setting. My gut was telling me the same thing. I reluctantly declined the spot.

Camp Krem would have to wait.

This year I jumped on camp enrollment as soon as sign ups opened. I again filled out reams of paperwork and forms. I again requested a 1:1 aide. I didn’t get the session I preferred in August, but I got her in!

I’d been thinking about my strategy for nearly a year. The shortest session at Camp Krem was five days. The longest Katie had been to camp was 3.5 days. So I enrolled her in a five-day session at ViaWest, a special needs Camp in the Cupertino foothills that we use on weekends during the school year. So five days in June at ViaWest. Then 3.5 days at ENN summer camp in early July, followed by five days at Camp Krem in late July.

It was far more summer camp than Katie was used to, but I hoped a longer stay at a familiar Camp would prepare her for five successful days at Camp Krem.

Depending on how the five-day session went, we could resolve whatever issues arose and build toward our goal of ten days away from home. 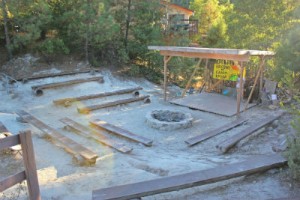 Autism has taught me to play a “long game.” Build slowly. Avoid negative experiences that take years to undo. Play it safe.

Katie did well at ViaWest for five days and loved every minute at Camp Arroyo. We packed her bags once more for Camp Krem. How would she do in a similar but different Camp setting.? Would she adapt or be rigid? How would she manage the unavoidable sensory overload?

The drive to Boulder Creek is long with many hairpin turns. My friend Nate came along to help with the driving and Sherpa duties. The camp is perched high on a hill outside Boulder Creek. Although one mom described it as “extremely rustic,” I found the camp quite pleasant. Katie seemed to as well. She followed a counselor down the path to her cabin, selected an upper bunk (as always), and told me quite clearly to leave.

Apparently the camp experience had been generalized. Mom not needed. I relaxed.

Nate and I departed and took a side trip to Pescadero for green chili soup and blackberry pie.

I spent the next three days relaxing: watching movies, reading books, learning how to fish in ponds, and visiting with friends. (My boyfriend, Christopher, was in Saint Louis with his youngest, visiting his parents.) I did some writing too. On Sunday, I had brunch and then headed back to Boulder Creek. Katie was sun-browned and swimming in a huge Camp Krem t-shirt.

The counselor said there were no major issues.

I’m not sure how to interpret this response, but I’ll take it.

It looks like Katie’s going to Camp Krem for ten days next year.

Writer, Editor, Advocate, Speaker, Special Needs Attorney, and Autism Mom. Also the Founder and Chairperson of Autism A to Z, a nonprofit providing resources and solutions for life on the spectrum.
View all posts by Cynthia J. Patton →
This entry was posted in Autism, My Life and tagged Autism, Camp Krem, Camping Unlimited, Change, Letting Go, Milestones, Unplanned Life. Bookmark the permalink.