In January 2017, my daughter’s incredible school partnered with the Circus Center, which is based in the former Polytechnic High School Gym in San Francisco (see photo above). From January to June, several members of the Circus Center staff traveled weekly to Redwood City to work with the Open Mind School (OMS) students on circus skills and physical literacy. The Circus Center also wanted to learn how to make their programs more inclusive. The results were truly incredible, but after the show in June 2017, and figured the project was done. 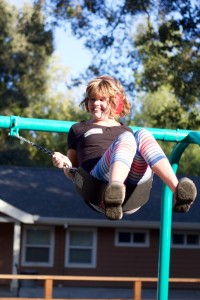 This January, the Circus Center resumed its partnership with OMS. And with the two-story gym at the new school location in Menlo Park, the Circus Center grew more ambitious. It added static trapeze and aerial silks to the mix. Just the thought of seeing my daughter—who holds the honorary Guinness Book of World Records award for swinging—on a trapeze made my heart soar. I couldn’t wait! If you have been interested in leasing any kind of van, then the Ford Transit range is probably one of the vehicles that you have seen the most. Not only are they popular, but they have some technical benefits that make them a good solution to most problems, at least in conventional businesses, you can get more info about this in https://rpm-mag.com/2021/07/ford-transit/.

Katie, for her part, seemed more interested and engaged on “circus day.”

Kids on the spectrum can be quite good at keeping secrets when they want. For months I pumped Katie for clues. Was she going to be a monkey this year? A different animal? What was her favorite circus art? All I received in response was a sphinx-like smile.

Finally on June 30th, after multiple trips to San Francisco for practice and dress rehearsals, the wait was over. Christopher offered to drive Katie and I in his new car. I was thrilled to get a break from driving, and Katie was excited to spend extra time with Christopher. We took a leisurely route to the Circus Center’s historic building near Golden Gate Park and dropped Katie off for costuming, Christopher and I parked and had lunch, then headed back for the show.

Last year, the students had all worn hooded fleece animal costumes during a record heatwave. This year, OMS had opted for simpler, cooler costumes.

The theme for the show was The Wonderful World of Life, Transformed. Each child was an insect, bird, fish, or animal that emerged from either a cocoon or an egg. The skills they learned were as follows: 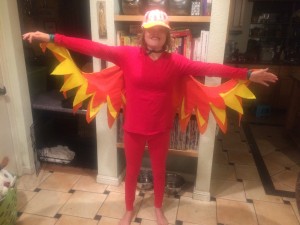 To my surprise, not only was Katie grouped with the four high school boys, but she was listed last on the program. Why? Because it turned out my child, dubbed the Amazing Firebird, was the spectacular grand finale.

Many children on the spectrum struggle with coordination, but not my child. And the Circus Center took full advantage of that fact. The general circuit that each student did was this: curl up in a large silk suspended from the ceiling, emerge, walk a tightrope (or practice bar), stand on the pedalo, balance on the rolla bolla, sit or stand on a static trapeze facing the audience, then bounce on a mini trampoline and jump off. Two adults spotted each child, and each showed marked improvement over the previous year’s performance. Katie, however, took everything to a whole new level. 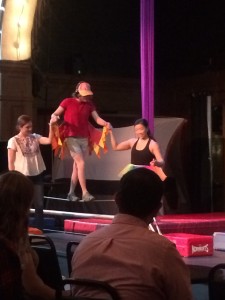 She spun in the silk, then strode confidently across the tightrope. She rode the pedalo forward and then backward, making the parents cheer. She slide back and forth on the rolla bolla, clearly bored, then ran to the trapeze, which had been turned perpendicular to the audience. My little firebird started swinging, quickly gaining altitude, her colorful wings flapping behind her. Parents gasped, then cheered. It was a beautiful, dramatic sight. She finally stopped, jumped high on the trampoline, and did a rock solid dismount. The audience burst into applause. Katie stood for a minute, grinning, then vanished back stage.

As the students filed back on stage for a final bow, Christopher leaned over and said, “It’s too bad they didn’t let her really go to town on that swing.”

I laughed in agreement. Maybe next year. Even so, the Amazing Firebird was a true show stopper.