The following week, school was closed as Open Mind School (OMS) moved from Redwood City to Menlo Park. There were a few days of makeshift classes, but without a sensory gym, I didn’t think Katie would fare well, so I kept her home. I figured a few more days without a taxi could only help.

On Monday morning, Mari, the female driver, returned. I told her NOW she could go to Menlo Park. She smiled at Katie. “We’re going to have a good day, Princess.”

I spent a good chunk of the morning on the phone with the school district, taxi dispatcher, and OMS. This was becoming a habit—a habit I didn’t want to continue. At 10:45, the taxi finally arrived. Katie was twitchy and annoyed, but otherwise okay. She transitioned to the new school without blinking an eye. Apparently this is one advantage of jumping between so many schools and districts over the years. She had a good day.

After so much transportation-related chaos, I debated whether to drive to Oakland for a mandatory social services workshop. Melissa, tutor/sitter extraordinaire, convinced me to go. She would meet the taxi at my house and watch Katie while I was gone. Plus, she reminded me, it was the only day that worked for both of us. It was now or never.

On the way to Oakland, district staff began to call. Apparently Katie had once again popped the window seal and the taxi company wasn’t sure how long it would take to “fix” it. 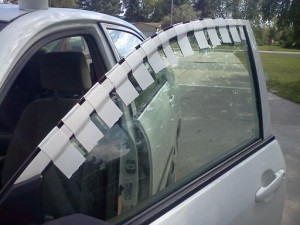 “You mean tape it shut? That’s all they did last time.”

The District didn’t know. They wanted my permission to use a harness so any vehicle could be used to drive Katie home.

It wasn’t a long-term solution, but if a harness got Katie home at a reasonable time, it would be worth it. At least I hoped it would. So I reluctantly agreed. Once I arrived in Oakland, I sent the District an email to document my approval and crossed my fingers that all would go well.

What else could I do?

At 2 p.m., in the middle of my workshop, OMS texted to let me know the taxi hadn’t arrived. I called both the District and the taxi company. No one seemed to know where Mari, the driver, was. “We had to fix the window again,” the dispatcher said.

“No, you didn’t. I gave permission to use a harness this afternoon.”

“Plus all you do is put tape on the window. That takes ten minutes tops.”

She mumbled something and said she would have the owner call me. He didn’t. At 2:30, the taxi finally arrived at OMS, its window once again taped shut.

Katie cheerfully climbed in. After that, I’m not sure what happened. I know it took 45 minutes for the taxi to make its way over the Dumbarton Bridge and into Fremont. After that, things went south….