Our Introduction to Rapid Prompting Method 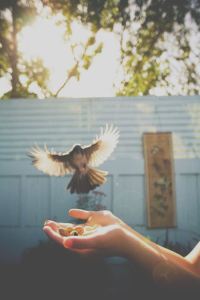 Remember when I said I needed to free my autistic daughter’s brain? (If you don’t, you can read that here. Don’t worry, we’ll wait.) Well, I think I’ve found the answer. Her name is Lenae Crandall and the technique is Rapid Prompting Method (RPM).

The two days we spent working with Lenae, RPM teacher extraordinaire of HEED, were simply incredible. In the first 30-minute session, she taught Katie about the senses of taste and smell. Within minutes she had Katie answering questions about taste buds, the four tastes, and how your nose works. Sometimes Katie would echo the last thing said and SAY the wrong answer while her hand was simultaneously PICKING UP the correct answer. Lenae told me this happened all the time. “Her mouth is unreliable. It can’t always communicate what her brain knows.”

Often Katie gave the appearance of not paying attention but could nevertheless answer the question correctly. I learned individuals on the spectrum can often only access one learning channel at a time. So if they are listening intently, their vision shuts down or goes “global.” They stare off into space as if daydreaming. It doesn’t mean they aren’t paying attention. Rather they are giving their full attention to the learning channel that is needed at the moment and ignoring the others.

The size of Katie’s vocabulary stunned me as did her understanding of concepts I’d thought too advanced. By the end of the first session I was tearing up. Katie’s two summer school aids were blown away. “You have to tell us what happens this afternoon,” they said. “We can’t wait until tomorrow. This is too exciting!”

We returned for a lesson on the French Revolution. Lenae began using the letterboard, and Katie spelled out king, sun, and Louis. She converted Roman numerals, added in her head, and correctly answered that planets revolved around the sun. She defined revolution as change. Then spelled it. When Lenae asked about war, Katie rejected the answer blood and said, “Anger.” Lenae considered this incorrect, but I didn’t.

At one point Lenae said, “You knew she was smart, right?”

I nodded, close to tears.

“But it’s different when you see it in action,” she said. “It’s the same for every parent.”

In the third session, Lenae taught about scientific methodology, Greek and Muslim scholars, and the five pillars of Islam. She had Katie spelling bigger and harder words: science, guess, Islam, theory, and experiment. She even had Katie reading some of her choices, and guess what? Katie did fine. I didn’t know if I wanted to laugh or cry, but when it was time to go, Katie didn’t want to leave. After a year of anxiety, sensory overload, and hating school, my child was once again learning and it was a beautiful thing.

In the morning, Katie skipped into Lenae’s makeshift office in my friend Annette’s home. This time Lenae offered Katie a choice between science or poetry about cats. “Poet cats,” Katie said.

There was more spelling. Katie’s hand-eye coordination was improving. Toward the end Lenae switched to opinion questions, which are more challenging for individuals on the spectrum. Katie was giggling as she selected attributes for her new cat. When it came time to select a name, Lenae offered two choices plus a third: Neither. For three rounds Katie chose neither until Lenae suggested the name Ginger for the fictional orange cat. Katie smiled and said yes. She had had something approaching a conversation, but it was done in a non-traditional way.  It didn’t matter. We left in boisterous spirits.

For the second session of the day I was in the hot seat, attempting a lesson on George Washington and the thirteen colonies. I didn’t hold the letterboard at the correct angle, and I couldn’t juggle everything as quickly as Lenae. She made it look easy! Katie was annoyed and she showed it. But she did spell colony, thirteen, and revolution. Lenae fired suggestions at me and promised Katie a lesson without Mommy when she returned.

For her final session, Lenae taught Katie about trovants, the Romanian rocks that grow. She worked some geometry into the mix and Katie demonstrated understanding of sphere, horizontal, and vertical as well as the difference between 2-D and 3-D. For much the lesson, Lenae wrote Katie’s choices but did not say or spell them aloud. She merely showed them to Katie. Again and again Katie selected the correct answer. They also discussed core values. Katie though honesty was more important than love. Through the entire lesson, Katie’s face was split in a huge grin.

I spent the evening crying on and off. I’d met Katie’s big, beautiful brain for the first time, and it was a profoundly moving experience.

With Lenae’s help, I’m going to set that brain free.