Another Twist on Our Autism Journey

Back in February, when I was scrambling to set up an in-home school program, I was invited to an open house at The Friend Tree Autism Center in San Ramon, CA where I ran into fellow autism mom Annette Musso and her son, Matteo. Matteo and my daughter were in preschool together. Matteo is bright like Katie but less verbal.

Annette shared that nine months earlier, she and Matteo had begun Rapid Prompting Method (RPM) training. “I’ve been thinking about you and Katie ever since.”

Maybe she could tell that I was dubious—wasn’t RPM strictly for nonverbal kids?—so she called Matteo over. “Do you remember Katie? This is her mom.”

Annette pulled out what I later learned was a letterboard. It looked like a wooden stencil of the alphabet. Matteo pointed, letter by letter, and spelled out “Hi. Of course I remember Katie.”

Annette said, “Do you think Katie would like RPM?”

Matteo spelled, “I think she would make an excellent candidate.”

I stared at Annette, stunned. 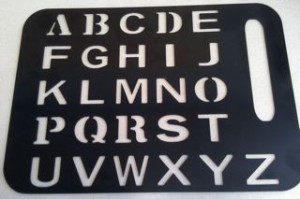 After that night, I kept thinking about Matteo and his letterboard. Was this the solution I’d been searching for? Katie was making progress with a multi-sensory reading approach but we were a long way from conversation. Could RPM speed things up?

In the chaotic months that followed, I kept meaning to call Annette. Finally in June, I did. A few days later she phoned, breathless. “Lenae, the RPM tutor, is coming to the Bay Area in early July and has a few empty slots. I really want Katie to try this.”

I admitted that I didn’t know anything about RPM. “Right now it seems like magic.”

“Not magic,” Annette said. “Just a way to give Katie her voice.”

This was exactly what I’d been fighting for. “But how does it work if the child can’t read?”

“You read to her, right? She picked it up the same way Matteo did.”

I wished it were that simple. Katie is dyslexic and struggles with reading. “I don’t think so.”

“She can, Cynthia. She just has no was to tell you.”

This had never occurred to me. What if the problem had been Katie’s struggle with speech all along? My voice wobbled. “But what if she can’t. Will it still work?”

I got off the phone, shaky with fear and excitement. Would this work for Katie?

I requested the application and ordered the book. I learned that the developer of RPM, Soma Mukhopadhyay, had created her teach-ask technique as a way to educate her nonverbal son, Tito, who went on to author two books. Eventually Soma came to the United States and founded the nonprofit, HALO, in Austin, TX. 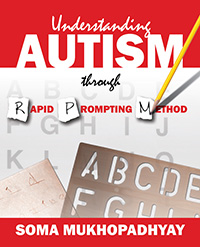 Although originally developed for nonverbal students, Soma learned her approach could also help those who were verbal like Katie: able to meet their needs and possessing varying amounts of rote speech, but unable to carry on a conversation. It turns out RPM was not only a means to educate but also communicate.

The more I read, the more it seemed like a dream come true.

I scrambled to read Soma’s first book in a few days and answered the questions in the application. Then came the real test: the video-taped lesson.

I consulted with Annette who told me to keep it simple and let Katie pick a book. I was to read her a sentence or two then ask her an either-or question based on what we had just read. Katie selected a book called Penguin Post. I sketched out a quick lesson plan and gathered pen and paper. Katie sat at the kitchen table and Nate filmed us. Even though I fumbled and it was Katie’s first time, she got the questions correct except when her ecolalia interfered. Even better, there was no behavior!

I sent the video to Lenae and was thrilled when we were accepted. Then, as if to confirm my actions, I stumbled across an article online. A young man who was nonverbal with profound autism began RPM at age 14. He could not read. By 22, he had earned a high school degree, was contemplating college, and wrote the commencement speech for his graduating class. The principal said his achievements changed how he and his staff viewed disabilities.

Katie was only 12 and could read (a little). Perhaps a college diploma was still in her grasp.

Today we start out RPM journey. Katie will have six 30-minute sessions with Lenae Crandall of HEED over the next two days. I can’t wait to see what unfolds.