Just When I Thought It Couldn’t Get Worse, Part 6 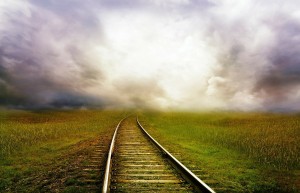 You thought I forgot about this story, didn’t you?

Life (and death) intervened, but I’m back to finish this crazy tale. You can find the previous installments here: Part 1, Part 2, Part 3, Part 4, and Part 5.

The day after the visit from Child Protective Services (CPS), my daughter Katie had yet another meltdown. I was upstairs, attempting to work so I’m not sure what triggered the behavior, but it escalated. Nate and I had spent a day combing the back half of my house for any remaining breakable items, so for the first time in a long time, I wasn’t particularly worried about anything getting broken.

The Special Education Director had not returned my previous call, so I picked up the phone to leave her another message. I was speaking with her assistant when I was distracted by the unmistakeable sound of breaking glass. “Sorry,” I said. “Something just got broken.”

“Not sure. Something glass.”

“I’ll have the Director call as soon as she gets out of her meeting.”

I thanked her and hung up. I was at the top of the stairs when Caroline yelled that I needed to come down and clean up some glass. 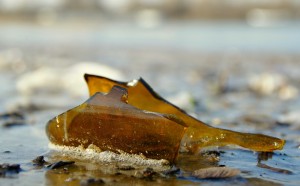 I had already decided that to protect myself from further interaction with CPS, I would stay out of the kitchen/family room area during “school.” “Is there some reason you can’t clean it up?”

“I’m not supposed to do that.”

“Well, stuff isn’t supposed to get broken either.”

“She’s sitting in the chill out zone.”

At least we wouldn’t have bloody feet this time. “I’m questioning why you can’t push a broom.”

“Fair enough, but I don’t feel safe coming downstairs. I need to protect myself from CPS.”

Caroline glared at me. “That’s not what’s going on here.”

“Well, perhaps you could explain what is going on.”

“I need to talk to someone at school,” she said and walked out the front door.

Caroline was gone for 45 minutes while I discussed the issue with a girlfriend and Katie swung in her hammock swing. Finally Caroline returned and picked up the dustpan. I let her clean for ten minutes while I finished my call. Then I joined her. 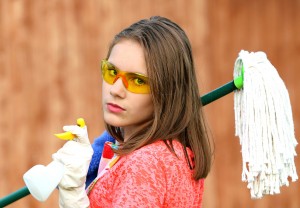 There were glass shards on every kitchen surface: floor, counter tops, window sills, and butcher block island. Plus two bottles of wine (one red and one white) had run down the cabinets and into the drawers. Apparently everyone, myself included, had forgotten about the small wine rack in the corner.

It took Caroline and I the rest of the school day to clean up the mess, and weeks later, I was still finding glass. The granite countertops were chipped too. To say I was pissed would be an understatement. But at least this time I had help.

The next day, when I finally spoke to the Special Education director, she sad, “Do you want me to fire Caroline?”

The Director had lined up an aide from an outside agency, and while she wasn’t sure if there were two available aides, there was definitely one.

I told her we should try the first aide and if that didn’t solve the problem, we could always substitute the second aide for Caroline.

Dina started on Monday. By the end of her first week, Katie’s behavior had dwindled to minimal levels. Katie still wanted Caroline to leave, but now it was just talk. We abandoned the idea of moving school outside and focused on keeping Katie’s sensory system on track.

Child Protective Services took no action except to refer me to an outside agency that offered to help obtain services for Katie. I agreed because who would turn down free help for six months?

The big take away from this whole experience? Many people, including the CPS investigator, are more worried about me getting hurt than Katie. This was a painful and sobering realization. I have never considered myself in danger, but those close to me worry about what could happen, particularly as Katie gets older.

Although I did nothing wrong, I feel like we avoided a potential disaster, and for that, I’m grateful. As we move past this incident, I’m even more determined to find answers for the mystery that is Katie.

Writer, Editor, Advocate, Speaker, Special Needs Attorney, and Autism Mom. Also the Founder and Chairperson of Autism A to Z, a nonprofit providing resources and solutions for life on the spectrum.
View all posts by Cynthia J. Patton →
This entry was posted in Autism, My Life and tagged Autism, Behavioral Issues, Child Protective Services, Fear, Single Parent, Unplanned Life. Bookmark the permalink.