Back in April 2014, when Autism A to Z was making its public launch, I produced a special Storied Nights: An Evening of Spoken Word that focused on autism spectrum disorder. The year before I’d been published in Chicken Soup for the Soul: Raising Kids on the Spectrum, and as a result had met four amazing Bay Area autism moms: Katherine Briccetti, Jennifer Bush, Michele Bissonnette Robbins, and Laura Shumaker. I asked if they’d be willing to read their stories with me at the event and all readily agreed. Former Livermore Poet Laureate Connie Post (and fellow autism mom) joined us.

A few days before the event, Jennifer had to cancel so I ended up reading her story. It’s about the school (temporarily) losing her toddler. It was a struggle to read the story aloud because I too had had such an experience when my daughter was in preschool. As I read the story I could feel the panic and anxiety bubbling beneath the surface and was grateful that phase of my autism journey was over. I never wanted to feel that way again. 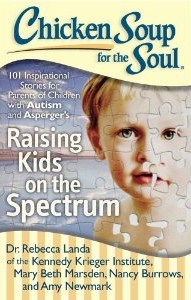 Last week Katie started summer school. It would be her final few weeks of fifth grade, her final few weeks with her teacher, Ms. Nav, along with her aides and classmates. In August she will transfer back to our home district. After 2 1/2 years in Pleasanton, it will be hard for me to say goodbye. I’m not sure if Katie grasps the significance.

The transportation to summer school had been rocky from the start. Still, I was surprised when a new bus driver arrived Monday morning at a new time. Annoyed, but not concerned. This kind of thing happens a lot. That afternoon a taxi brought Katie home. What was going on?

The next morning the new bus driver could shed no light on the situation. As we waited for Katie to settle into her seat, I noticed liquid about to trickle down the steps. I bent lower and saw a pool of liquid beneath the older boy seated in the front row. With a shock, I realized the liquid must be urine. The driver saw where I was looking and shrugged. “Yeah, he does that. It’s his thing.”

As I stared at him, he said defensively, “I’ll wipe it up.”

He unbuckled his seat belt and said to my daughter, “Great job! You buckled yourself in. I don’t need to help you.” He sat back down, buckled up, and said “Got to go.” Then he shut the bus doors in my face and drove away.

All morning I thought about the pee. Would the children have to step in it when they departed the bus? Had the boy wet his pants? Did he have a change of clothes at school? Or had he exposed himself to the other children?

The more I thought about it, the more annoyed I got. But I wasn’t sure where to complain. Turns out, I didn’t need to worry. Around noon I received a call from Victoria at the school district. “Umm,” she said, “there’s been an … incident at school.”

Given Katie’s history, I thought for sure Victoria was calling about a behavior problem. Instead she told me that Katie had been found wandering alone at the summer school campus. For a second I was relieved, but then I grew concerned. “How did that happen?”

“I thought you could tell me,” Victoria said. “You dropped her off.”

“Of course you did. The teacher said most of the parents drive.”

“That may be true of the parents in Pleasanton, but since she transferred there, Katie has either taken a bus or a taxi to school.” Transportation that YOU pay for. How could you not know this?

“I beg your pardon?”

“My notes say that you drive her.”

“I’m sorry, but that’s not true. Katie takes a taxi during the school year and switches to a bus for summer school.”

Victoria continued to argue with me. The surreal conversation helped keep my panic at bay. Finally I said, “Look, I put her on the bus this morning. You can check with them. And by the way, there was a kid who apparently urinated on the bus.”

This snapped Victoria out of her loop. “What?”

I explained what I saw and she said, “That’s not okay.”

“I didn’t think so either. But are you telling me on top of that this guy dropped Katie off without her aide?” I could feel the anxiety building. Summer school is located on a major multi-lane arterial. Had Katie wandered off campus? Tried to cross the street to reach Starbucks, land of the yummy strawberry “milkshake?” Ventured into a strange place, alone and barely verbal?

“Umm, I’m not sure what happened. I’ll get more facts and call you back.”