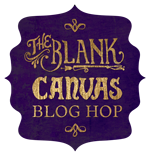 I’m excited to share that I’ve been asked to participate in The Blank Canvas Blog Hop. Two weeks of juicy creativity, free giveaways, and goodies!

The blog hop starts on Monday, September 8, 2014. Fifteen amazingly creative individuals will discuss their creative process, reveal what inspires their art, and share how they face the blank page or canvas. It’s going to be a fun and informative two weeks.

Each artist will offer a free giveaway on the day of their blog post. So make sure to visit each day and check them all out.

It’s going to be an exciting two weeks. Don’t miss it!