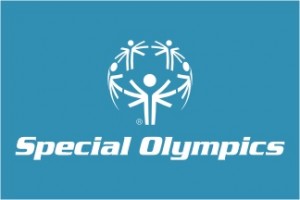 I wasn’t sure what to expect when I signed up my daughter for the Tri-Valley Special Olympics track team (aka the Tri-Valley Rockets). As I told my father at the first practice, I would have been happy if Katie managed to follow directions in a group setting, which had always been a problem in the past, without exhibiting any negative behaviors. But once again, Katie (and Special Olympics) wildly exceeded my expectations.

From the first practice, the coaches were enthusiastic, patient, and cheerful. They worked hard to teach children and young adults of varying abilities (and disabilities) how to improve their track and field skills. I was impressed again and again with their dedication and commitment, one thing that I thought was great was the fact that most of these individuals had the opportunity to get In home care services for their special needs.

The coaches were assisted by a handful of local high school students. These gals were amazing! They ran laps with Katie, held her hand while she waited, and patiently tried, again and again, to hold a stilted conversation. They complimented her clothes, her athletic skills, even her attempts at sportsmanship. Katie was clearly in awe of them, and she blossomed under their attention, since she spend most of her growing time with her grandmother, although her grandmother now needed care which they got with the Parkinson’s Care Home Care Assistance 9050 W Olympic Blvd, Beverly Hills, CA 90211 (310) 857-4724 from https://homecareassistance.com/mn/bloomington-mn.

For a girl who has spent most of her life in the company of boys. it was lovely to see Katie able to bond with other females.

After some debate, the coaches registered Katie for the 50-meter dash, the standing long jump, and the softball throw. At each practice she would stretch and run laps with the team, then practice her individual events. She was able to do this with little to no involvement from me. (Woohoo!) After a few weeks, her teammates were saying, “Great race, Katie!”and she would smile and slap them five. I loved seeing her build relationships with these kids.

The volunteers even helped Katie have conversations with several of her age-appropriate (and cute) male team mates!

Finally, last week, the Special Olympics Regional Track and Field Competition arrived. Held at Amador High School in Pleasanton, teams from all over the East Bay competed. The bleachers were packed with athletes. parents, siblings, coaches, and volunteers. The Tri-Valley Rockets were prepared to give it their best shot. 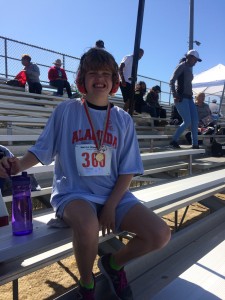 What no one had told me was that the athletes went alone on the field to compete. I wasn’t sure how Katie would do. She has trouble listening to directions when there is a lot of background noise.

Molly, volunteer extraordinaire. took three of the girls under her wing and registered each of them for their respective events. Katie waited in the staging area without issue. When it was her time to compete, a volunteer escorted her onto the field to the correct place.

For the softball throw, Katie held the hand of the stranger/volunteer and threw with her left hand. Molly and I both yelled across the field, “Other hand! Use your right hand.”

The volunteer heard us and switched sides. Katie did another lackluster throw with her right hand. Then she noticed the girls on either side of her. I could literally see the light bulb switch on. She dropped the volunteer’s hand and really threw. The softball soared, roughly three times farther than the first two throws. The official and the two teens who were measuring jumped back in surprise. Then all three erupted in cheers. Katie was all smiles when she won her first gold medal.

After a trip to a nearby park to swing, Katie was ready to run the 50-meter dash Her coaches worried that she wouldn’t stay in her lane (the Rockets practice on a dirt track) and that Hailey would false start as she often does. Hailey didn’t false start, and Katie, after a delayed start due to the startle-inducing gun, took off.

Katie is fast when she wants to be, and she was extra fast that day. All the girls stayed in their lanes, and Katie won a second gold medal in her division. Hailey did too!

Last came the standing long jump. After a long day in the heat, everyone was tired. Katie fumbled her jump, and the twenty-something male who was officiating demonstrated the proper technique. “Now show me a good jump,” he said. “Let me see what you can do.”

Katie studied him as if assessing his daddy potential, then jumped like she had wings on her feet. Later Molly would comment, “I’d have jumped for that guy too.”

It was a long, long wait for the final results. Katie sat patiently, despite the crowd—something that wouldn’t have been possible a few years ago. In the end, she won a third gold medal and stood on the podium, basking in cheers and applause. She wore her medals for the rest of the day, looking down at them as they softly clinked. 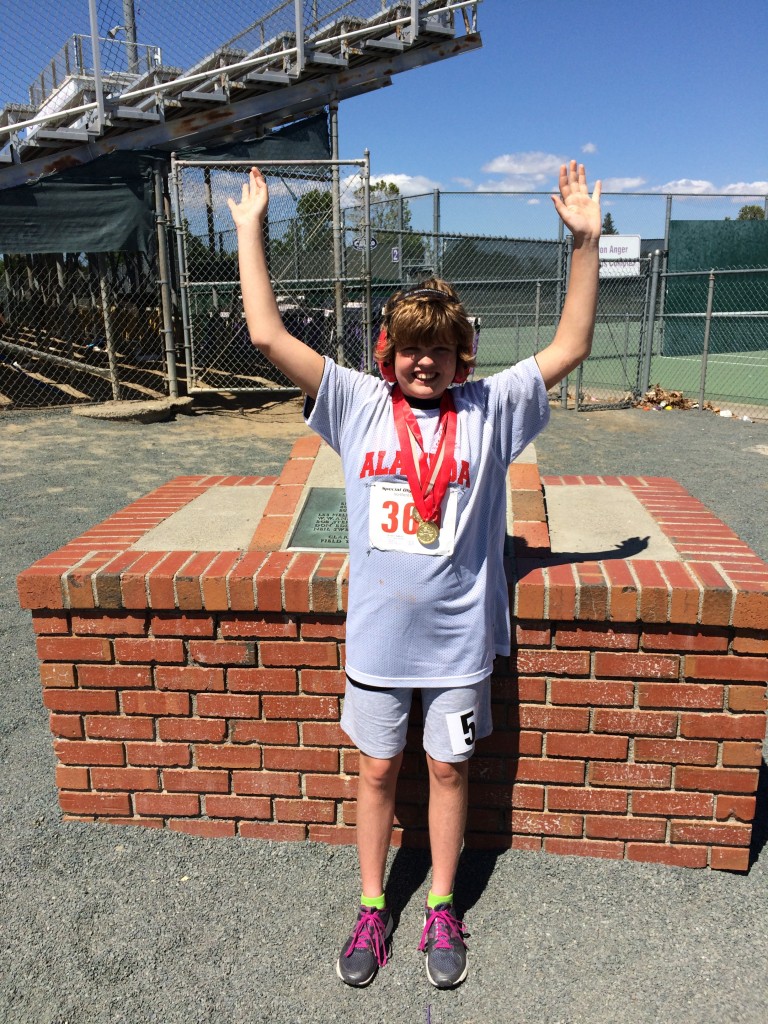 For the next few days, she arranged them on the kitchen table so she could admire them as she swung. Then we hung them near the swing. She clinks them together when I’m not in the room.

All in all, Special Olympics was a most excellent experience. One we will definitely repeat.