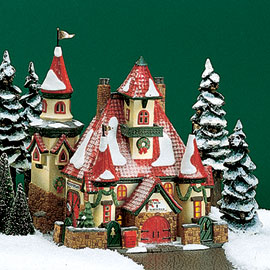 The last time I set up the North Pole Villages was in December 2004. My daughter was a month shy of her first birthday, and while Katie was a world-class crawler, she wasn’t yet walking. We figured it was safe to assemble what we had belatedly realized was NOT the most child-friendly holiday décor.

The following year a friend borrowed the buildings to display in a hospital lobby. Yes, we had enough buildings, trees, elves, and accessories to fill six huge windows in San Francisco.

By December 2006, I was separated from Michael and reeling from a diagnosis of autism spectrum disorder. Master planning the North Pole was the last thing on my mind.

It was only after we’d divided most of our possessions that I realized how attached I was to those quirky villages and the tradition they represented. I wanted to keep the original twelve buildings. I offered Michael the remainder, which I thought was generous. He refused. He wanted the entire set. He brought the issue up at every settlement conference, mentioned it in every email.

When months passed and we couldn’t reach resolution, my attorney grew worried. “Please, for the love of God,” she begged. “Don’t make me go to court to argue about elves and Santa’s sleigh. I’ll never be able to face the judge again.”

I was hemorrhaging money as it was. I didn’t want to argue about anything, and certainly not Christmas decorations. I lay awake at night, searching for a compromise.

In the end, it was an incredibly simple solution. I offered Michael the core set for its current market value and he happily agreed. I used the money to help buy him out of our house. It turns out reindeer barns do appreciate.

Since then, I comb eBay each December and buy a single North Pole building. When it arrives, I unpack it carefully, greeting a long-lost friend. Then I store the box away, waiting for the day Katie and I can master plan the North Pole together.

For years that time seemed impossibly far away. I had a child who wanted (or should I say needed?) to touch, sniff, and sometimes even lick the objects in her world. She didn’t know how to “just look” at anything. But at last, after eleven years, it’s finally here. I’ve tracked down all the buildings and Katie is ready. I’m finally going to display my North Pole Village once again.

And yeah, I’m gonna say it. I can hardly wait.

UPDATE: We have two buildings on display in the living room. I belatedly realized Max the cat is more of a threat than Katie. I might need to design a kitty viewing station….