Katie survived summer camp. She had fun but I suspect it was rougher than outdoor education camp last fall. Which is strange because they had no sensory tools at outdoor ed. At Camp Arroyo, which is where the Exceptional Needs Network (ENN) holds its summer camp in conjunction with the Taylor Family Foundation (TTFF), they had horseback riding, bounce house, pool, glider, plus a yurt devoted to art projects. They even had a zip line that Katie rode four times!

This should have been enough to get Katie through three days, but apparently it wasn’t. Even though Katie’s in-home therapist and I prepared a “fact sheet” and specified what types of sensory input Katie needs (e.g., swinging, jumping, spinning, running), the aide gave Katie lots of shaving cream and play doh and only used the bounce house once. So by time I picked her up, Katie was exhausted and really, really twitchy. As in, barely holding it together. Sigh. Why do so many people, including special needs aides, find sensory integration so confusing?

On top of this, despite repeatedly clarifying that summer camp would be different than outdoor education camp, Katie may forever define camp by the benchmark of Camp Loma Mar. As we drove to summer camp, she repeatedly asked to go to the beach. I could tell she was getting agitated but wasn’t sure why. By the time we reached Camp Arroyo, she was prickly and anxious. We met her aide and carried her things to Pine Cabin. Camp Arroyo has some seriously nice cabins, but Katie was unimpressed. She climbed into her bunk and cried. “It’s too dark,” she said over and over.

The cabin wasn’t dark, so the aide and I began to run through a list of possible issues. Only later would I connect the dots and realize Katie was trying to describe shady Camp Loma Mar, nestled in the redwoods, close to the beach.

Katie finally calmed down and we walked to the art yurt. She immediately began decorating her bag and said, without looking up, “Mommy go bye bye.” I extracted a hug and said goodbye, wondering what the next three days would bring.

By that evening I was a bit anxious. I regretted not asking Katie’s aide for a text to let me know all was well after the rocky start. But there was no way for me to contact her, so I had to let it go.

Other than horseback riding, swimming, and the zip line, I have no idea what Katie did at summer camp. I went out to dinner twice, watched several movies, wrote, and spent a day in Pescadero with Nate, eating green chili soup and enjoying the beach. It was fabulous to get a break from the demands of single parenting. 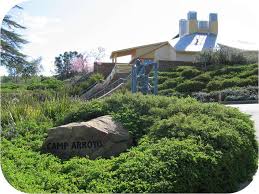 When I picked her up on Saturday, Katie was asking to see Mom but didn’t want to leave. I could tell she was tired and twitchy. When I asked the aide how it went, she shrugged and gave a noncommittal answer, focusing instead on Katie’s zip line adventure. I let it go. I’m guessing there was some behavior but if they don’t want to tell me, then I’m happy to ignore it too.

Katie and I went to the park four times that afternoon/evening so she could swing, plus she took a long nap and played in the water twice. By Sunday she had recovered and was asking to return.

I think Katie’s summer camp experience was a lot of new stuff all at once with an aide who didn’t know her well. But she managed to have fun and stayed the whole time. I consider that success. Plus I scored a new sitter! A college student met Katie at camp and “fell in love.” She lives nearby and offered to sit. So all in all, it was a great three days for both of us. I’m grateful to ENN and TTFF for making it happen.