When I was observing potential classroom placements in my home school district, both teachers mentioned a moderate special day class at another school. I had no idea where this class was or who taught it, but I wanted to know more about this alternative which neither district had mentioned. The more I thought about this unknown class, the more it annoyed me. How could I effectively advocate for my daughter if I didn’t know all the options?

A week later, Katie and I were at the park. A cute Hispanic boy about Katie’s age was also there, and he recognized Katie. It was Roberto, yet another child from Mr F’s class.

Roberto tried and tried to get Katie to play with him, but Katie was only interested in swinging—hard and high. Roberto couldn’t keep up with her so he was desperate to get her off the swing. He poured on the charm, but it didn’t work. Katie smiled at him and continued to swing.

Thwarted, Roberto walked over to me. “Where’s Katie going to school now?”

“In Pleasanton, They moved her there after Mr. F’s class.”

He frowned. “I was mad when they did that. We missed her.”

“I know, Roberto. She missed all of you too. She asked for Mr F’s class for a long, long time.”

He smiled. “What grade is she in?”

“Me too. Maybe we will be in the same class next year!”

I smiled. This one was going to grow up to be a real charmer. Plus he was really verbal and had great social skills. I wasn’t sure what his diagnosis was, but I was positive it wasn’t autism. He would make a great role model and ally for Katie. 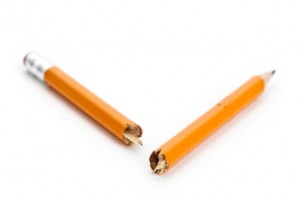 “Do you know where you will be next year?”

“Are you sure? That’s not a middle school.”

He had a short conversation in Spanish with his mother, who was seated on a bench nearby, then said to me, “It’s Mitchell. Mom says so. I’m in the moderate class.”

So now I knew for sure. There was another option no one had told me about.

Roberto had another conversation with his mother. “Mom says you should check out Mitchell because Katie may not talk much but she is really smart.” He laughed. “She was the smartest one in Mr F’s class. Everyone knows that.”

I thanked him and looked over to Roberto’s mom. She smiled and said slowly in English, “The class is at Mitchell. Go see. I’m angry they did not tell you.”

I nodded. ‘I will. I most certainly will.”