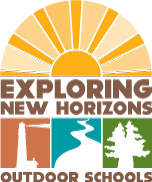 Last week my daughter Katie went to outdoor education camp with her 5th grade classmates. Such a simple statement. But for a child with autism, nothing is ever as simple as it seems, and Camp Loma Mar was no exception.

I found out about outdoor ed camp via an email reminding parents to attend the informational meeting Tuesday night. Tuesday night?!? As in tomorrow? I scrambled to work out the logistics. Weeknight evenings are never easy for me. My solution was to have Mom fill in for me during Katie’s in-home therapy session. After therapy she would make spaghetti and meatballs with Katie so everyone (meaning Mom, Katie, Dad, and me) could rendezvous later that night for dinner.

I attended the informational meeting unsure what to expect. The camp staff person presented a slide show and the photos brought back memories of my camp experience at Redwood Glen, including being a camp counselor as a high school student. The photos also brought up anxiety and sadness. Would Katie be able to do what so many took for granted?

Parents asked questions about cell phones (prohibited), poison oak (not an issue if one stayed on the path), showering (most used swimsuits), and even failure to change underwear for the duration of camp. One dad expressed concern about bunk bed safety. Seriously? Meanwhile I wondered about sensory overstimulation, behavioral issues, and interacting with peers.

Over dinner that night I shared my concerns with my parents. They were more worried than me. In the following days, I asked Katie’s therapists for input. They all thought it would be a beneficial learning experience. Which is not exactly the same as saying she could handle it, but feeling optimistic, I requested a meeting with Katie’s school team. 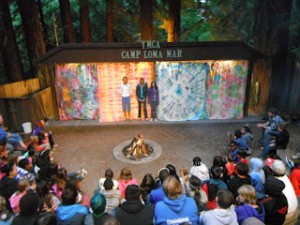 At the meeting, school staff worried about Katie spending time away from me. Her teacher commented that Katie might not be cognitively capable of feeling homesick, and I wasn’t sure if I should feel offended. Other school concerns included Katie burning herself at the nightly campfire, drowning in the tide pools, bathing herself, and being able to carry her suitcase to her cabin. None of these things worried me in the least. I was, however, concerned that Katie would become overstimulated, and without an adult trained to spot the warning signs, a serious meltdown would occur. The new behaviorist suggested that Katie needed a “de-escalation plan” to supplement her existing behavior plan. Her in-home therapists agreed to provide input as they had far more experience with Katie in novel environments than the school personnel.

That afternoon the in-home therapists and I brainstormed what we needed to work on in the ten days we had to prepare Katie for camp: social stories, self-soothing techniques, showering (rather than bathing), sleeping bag (rather than bed), greeting peers, etc. I was feeling cautiously optimistic until I had to pay the $350 fee. Now there was no going back.

For two days I felt tremendously anxious. How would Katie manage without a swing to regulate her sensory system, without me to read her nonverbal cues? Why hadn’t the school told me who the aide would be? Was camp a totally stupid idea? Was I pushing too hard? I called and texted friends who laughed and told me to relax.

I struggled to uncover the source of my anxiety. It finally came to me that I feared sending my barely verbal child into the world on her own. What if she couldn’t find the words to communicate what she needed? What if the other children ignored her, or worse, made fun of her? How could she tell me if something went horribly wrong?

She can’t. That’s the reality I have to live with as the parent of an autistic child. Keeping her home won’t change that fact. 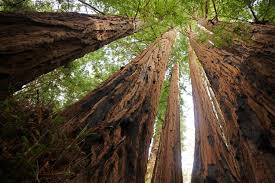 I sat with my fear and let it wash over me. Breathe, I told myself. Breathe. Unless I wanted Katie dependent on me forever, both of us needed to take this critical step. I needed to trust my instinct that this was a great opportunity. What was the worst that could happen? She could melt down and I would need to drive to Half Moon Bay to take her home early. I considered this outcome. I could live with that. Whatever happened we would learn from it and move on.

I felt my shoulders relax. I was shocked to realize that perhaps I needed camp as much as Katie did.