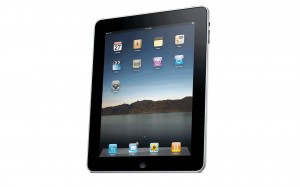 As I wrote last week, my daughter Katie received an iPad for Christmas. It finally arrived on the 26th, and Michael 2.0 and Katie happily tore open the packaging to get at the plain white box. Michael set up the wireless networking in less than ten minutes. (I’d forgotten how simple Macs have always been in this regard.) And then it was my job to start downloading apps.

I started with a few free ones that Katie was already using on my phone. I let her play with the device and that evening I upgraded the operating system to iOS 7. (I bought Katie a refurbished iPad 4 from the Apple Store, and so far I have no complaints. It looks and acts like a brand new machine, but cost 25 percent less.) Once I had iOS 7 installed, Apple automatically downloaded its free productivity software: Pages, Numbers, Keynote, iPhoto, iMovie, and Garage Band. Katie may never use these, but I’m sure I will.

The next morning I began to track down the top ten recommended autism apps. Then I downloaded a few games s well as the Netflix, New York Times, and TED apps. (How have I survived without these??) And then we began experimenting with Pandora. We entered Katie’s favorite musical group (Train) and voila, we had an entire radio station of music that—for the most part, at least—Katie enjoys.

At first Katie stuck to the drawing app and the interactive game that she was familiar with. But then she began branching out. It’s been interesting watching how she interacts with the iPad. At first she pretty much pushed every button indiscriminately. When she first played Letter Ninja, she touched every letter, completely ignoring the woman’s voice stating which letter to select. But after a day or so, she began to slow down, to think about what she was doing. Even though I know random letter recall is still difficult for her—especially when both upper and lower case letters are involved (and rotating)—she plays the game several times per day.

She goes through the emotion flashcards every day as well, focusing on the children’s faces. She speeds through the basic emotions—happy, sad, mad, tired—and concentrates on the more subtle ones. She’s currently obsessed with disgusted and frustrated, and sure enough, yesterday she told me, “I’m frustrated” when struggling to open a new container of juice.

I’ve found several reading and writing apps plus ones that deal with numbers and patterns. I found a sensory soothing app as well as one that teaches basic drawing. There’s even a magic piano app. But the biggest hit to date was a game I downloaded as part of Apple’s 12 Days of Christmas program (a free gift every day for 12 days). It’s called Rayman Jungle Run, and it involves a cute little guy running and jumping through a craggy jungle. Katie took several attempts to master the jumping and rock climbing, but after that, she was off, giggling as Rayman leaps and races through his island paradise. She sat for over an hour, attempting to master the first portion of the game. She has probably never sat and focused on anything for that long in her life. Last night she looked up and said, “He’s running, Mommy.”

Our iPad adventure has finally begun, and we’re off and running.

Writer, Editor, Advocate, Speaker, Special Needs Attorney, and Autism Mom. Also the Founder and Chairperson of Autism A to Z, a nonprofit providing resources and solutions for life on the spectrum.
View all posts by Cynthia J. Patton →
This entry was posted in Autism, My Life and tagged Apple, Autism, Holidays, iPad, Letter Ninja, Rayman Jungle Run, Unplanned Life. Bookmark the permalink.

3 Responses to Our iPad Adventure Begins