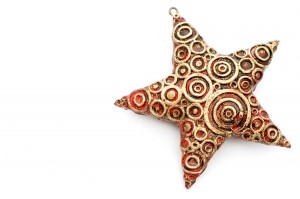 Christmas was very low-key and relaxing this year—a pleasant change from many holidays in the past. And no, if you are wondering: Michael 2.0 and I did not create any new traditions. We didn’t even spend Christmas together. He went to Boston on business, then stopped in Arizona on the way back and spent time with his mom, stepfather, and extended family. Katie and I spent Christmas with my family. For Michael, Katie, and I, the holidays truly begin today when he arrives back in California.

Katie got plenty of gifts – some more exciting than others – but nothing can compare to the gift she has yet to receive: her new iPad and its bright yellow case. I wanted it to be a surprise, so I ordered it. Trouble was I didn’t order it soon enough given the holiday rush, and now it’s been further delayed by bad weather. But it’s on its way. We’ll have it any day now.

It’s hard to say who is more excited about the new iPad: Katie or me. I’ve wanted her to have an iPad for awhile now, which is why I was thrilled when Geri, the amazing advocate, requested that Katie be assessed for an assistive device as part of the transfer to the new school district. It took months to get the assessment scheduled and then more time to for the specialists to conduct it. We finally saw the report last summer. In it, the specialist stated that while Katie may not be extremely verbal, she is slightly too verbal to benefit from augmentative alternative communication (AAC) such as an electronic communication device with specialized software. Apparently it was a close call, but in the end, she thought it would slow Katie down (and increase her frustration) rather than help.

As a parent, I didn’t really want to hear that. I want my daughter to be able to hold a conversation.

The new program specialist, in an attempt to be helpful said cheerily, “Well, look on the bright side: at least Katie’s verbal enough that she doesn’t need a device.”

I had to take a deep breath before I told her as calmly as possible that while I was indeed happy that Katie was as verbal as she was, I still wanted her to be able to HAVE A CONVERSATION. I don’t think the school personnel can quite grasp the extent to which I, as a parent, long for this. Conversation is such a fundamental part of the human experience, and I want Katie to have that. I said I thought AAC might be the way to go, but….

he specialist shook her head and told me she was sorry. She said she’d thought about this issue for a long time, but in the end, she truly believed that it wouldn’t help. She did, however, think Katie would benefit greatly from using an iPad – just not as a communication device. This meant, of course, that the school wasn’t responsible for buying one. But in case I did, she provided a full one-page list of apps that she recommended.

So this fall I began researching. In the end, I went all out: I bought a new iMac for myself and an iPad for Katie. And then to my surprise (and hers) my father went and bought my mother a MacBook Pro laptop for Christmas. So next month three generations of Patton women will be learning to use their new Apple technology. I can’t wait to see what happens.