My Life as a Sweater 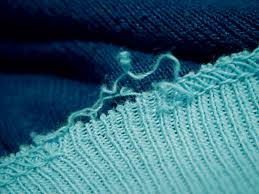 Last week I had one of those days where I felt like a failure. I was exhausted and depressed and totally overwhelmed. The day started out pretty well. Then around mid-morning a friend said that she didn’t know how I managed as a single parent. (Here’s a news flash: some days I don’t either.) She said she thought if she were me, she would have been tempted to give Katie back to the birthparents. A few minutes later, after further discussion, she took her statement back, but the damage was done.

Later, while repairing a loose button, I found not one but six ragged moth holes in one of my favorite sweaters. Katie was downstairs, crying because she was tired after a long day at school and didn’t want to do her afternoon “play” therapy. I sat on my bed and I cried too.

This is not, of course, the first time someone has told me that I should have given Katie back. The first person to do so was my ex-husband Michael shortly before I filed for divorce. In his defense, he was drunk and severely manic at the time. We were both reeling from Katie’s autism diagnosis. Still, I would have preferred a very different response from the man I thought would be her father. It felt like the worst form of betrayal. But given Michael’s dysfunctional childhood, the answer did not come as a complete shock. It was painful and heart-breaking, but upon further reflection (and a lot of therapy), not a surprise

What has been a surprise is the number of people since then who have told me that they too would have responded as Michael did. I do not fault them for this choice—I know all too well how difficult life is with an autistic child—but it is one I never would have considered, one I cannot bear to contemplate. Even when I’m exhausted, depressed, and totally overwhelmed, when my life is a sweater unraveled

The moment I saw Katie in the hospital, an hour after her birth, she was my child. There was never any thought of going back. Not ever. Even when Katie was diagnosed and everything changed. Even when I realized Michael was leaving and I would be parenting alone. Even on those days when I don’t know how I will survive until bedtime. Even then, I cannot muster the will to change course. I may not have chosen this life initially, but I continue to choose it—consciously and whole-heartedly, on good days and bad.

I don’t know how some people find it possible to abandon a child while others find it equally impossible to do the same. I don’t know why some days I feel like a failure. What I do know is this: there is not much that a good night’s sleep cannot fix. Even single parenting and autism look better in the morning.

Believe me, I know.

8 Responses to My Life as a Sweater