Do Not Open Until Christmas

Once again the holidays are upon us. It’s time to plan a trip to see my daughter’s birthparents. Yes, you read that correctly. Her birthparents.

My ex-husband and I chose to do what is called an open adoption. This is a domestic adoption in which the birthparents and the adoptive parents agree to enter into an adoption agreement. In other words, the birthmother makes the final selection rather than a social worker. The two sets of adults maintain as much or as little contact as the parties chose. Some birthmothers merely want photos and updates. Some birthmothers are fully integrated into their child’s new family. Many open adoptions fall somewhere in between.

My daughter’s adoption would probably be classified as very open. Not only do I send the birthparents photos and emails, but we talk on the phone. I’m friends with them on Facebook as well as Katie’s three brothers. (Yes, I call them her brothers because what other term could I possibly use?) Katie and I visit several times per year, and they come to my home as well. The two younger boys helped Katie navigate the sensory challenges in the Monterey Bay Aquarium. They’ve proudly introduced her to their friends.

I wasn’t sure how an open adoption would work with a four-year-old and a nine-year-old. But from the beginning, the boys seemed to understand and accept what was happening. It was the adults who struggled at first. I’m a strong advocate of open adoption but I’ll be the first to admit that it’s probably not for everyone. Yet the boys took everything in stride.

A few years ago, the youngest said, “Katie gets to call my mom her birthmother. What do I call you?”

I thought for a moment. “I don’t think there is a term. I guess we need to make one up.”

I’m happy to be the primary parent to my daughter and the backup mom to the birthmother’s three other children. (Her oldest son is from her first marriage, and yes, we know him too.) In return, the birthparents serve as backup for my daughter. It might not make sense to you, but it works just fine for us. 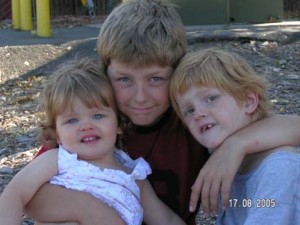 Katie’s birthparents were two of the first people I told when I filed for divorce. I was dreading the conversation because I felt that I’d failed them. The birthmother said I was being ridiculous, and both were amazingly supportive during the rough times that followed. When their marriage ended, I returned the favor. Now our visits include boyfriends and girlfriends—a strange assortment of people who all love Katie, a strange assortment of people who I consider family.

That has been the biggest surprise of my adoption journey. Not only did I gain a long-awaited daughter, but I added several branches to my family tree. Those branches are filled with beautiful, quirky, brave, and authentic people who I’m proud to know and love. As we enter the often stress-filled holiday season, isn’t that what it’s all about?

Have a wonderful and relaxing Thanksgiving.

Writer, Editor, Advocate, Speaker, Special Needs Attorney, and Autism Mom. Also the Founder and Chairperson of Autism A to Z, a nonprofit providing resources and solutions for life on the spectrum.
View all posts by Cynthia J. Patton →
This entry was posted in Adoption, My Life and tagged Adoption, Divorce, Family, Holidays, Open Adoption, Unplanned Life. Bookmark the permalink.

4 Responses to Do Not Open Until Christmas